The following is a reprint of an article that I wrote for Lutheran Forum Magazine, Winter 2007. It will appear here in several parts. Read Part I first.

From May 2001 until the following May, we created fourteen four-foot by two-foot multifigure composition bas-reliefs. We collaborated on the design as a whole so that we would have a cohesive set, but we were each responsible for articulating seven in clay. We worked for very little pay, but sometimes when you are young you can get by on enthusiasm.  That entire year, we spent contemplating the journey of Christ to the tomb, as each image had us concentrating on a particular aspect of the Passion.  The new church building opened with all fourteen Stations in place.

Seven months later and after much deliberation on the part of the arts committee at Our Lady of Mercy, they chose me, a twenty-five year old sculptor, to create two over-life-size marble sculptures for niches placed on either side of the altar. Thus began a journey, difficult beyond what I could imagine at the time, which would last the next several years. 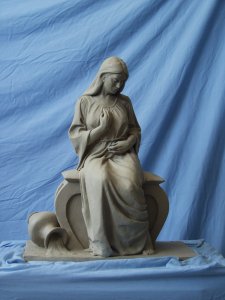 I started the first of the year in 2003. The first thing that I did was create a one-third scale model of both the Virgin Mary and St. Joseph. Once I completed the model of the Virgin Mary, I sent it to a studio inBaltimoreto be roughed out and enlarged in clay. The enlarging process is very physically intensive and I spared myself many hours by sending the work to another studio specializing in enlargement. 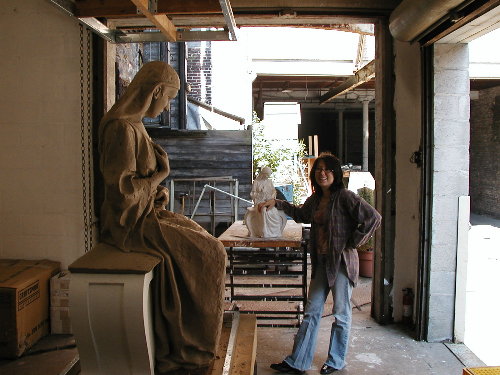 The process took several weeks, so I used the time to move to new quarters. My lease was up at the current studio and the landlord was renovating. After searching for nearly a year, I found the perfect space for rent just down the street. As soon as I saw the old mechanic’s shop, I squealed with delight. This was my dream studio! It had twelve-foot ceilings, a garage door. It even had an upstairs with an office and a bedroom; I eventually moved into the studio and lived there for two years. Once I was moved in and things were cleaned and painted, I brought the four-hundred pound clay sculpture of the Virgin Mary back from Baltimore to finish the work. The finishing work on the Virgin Mary went on for nearly a year. Using my fingers and wooden tools, I carefully articulated every last detail, from the texture of her garment to her fingernails.

Most people imagine the artist caught up in fits of passion, creating, oblivious of the needs of daily life.  We picture the sculptor chipping away in a frenzy of artistic ecstasy. The most exciting part of creating art is indeed the conceptual phase at the beginning. Sometimes there are moments of artistic bliss afterward, but most of the work, is just work. It’s the daily plugging away that gets a sculpture done, not fits of passion.

The full-scale sculpture of the Virgin Mary was finished in the early spring of 2004. Once the clay was complete, I sent the sculpture back to the same studio that enlarged it. The studio made a latex rubber mold of the sculpture and poured a plaster cast. Compare this process to photography: the clay sculpture is the film and the mold is like a negative. The plaster, then, is the print. Once Mary was cast in plaster, I recycled the clay and began work on St. Joseph.

In the world of sculpture, there are sculptors and there are carvers. Sculptors fashion the image in clay and provide a plaster cast, called a carver’s model, to a stone carver. This is the traditional way of working and the manner in which the Washington National Cathedral’s stone studio operated. Italian carving studios are filled with plaster casts of many different artists, while the carvers carefully copy the images in stone. In the early summer of 2004, I sent the carver’s model of the Virgin Mary to Malcolm Harlow, a stone-carver in Virginia who worked at the Cathedral for many years. We also sent him nine tons of marble, imported from theCarraraMountainsinItaly. Once the stone and plaster were at the studio, Malcolm began the process. He worked for two years, gently chipping away the pieces of Italian marble until he revealed the image I created of the Mother of Our Savior. 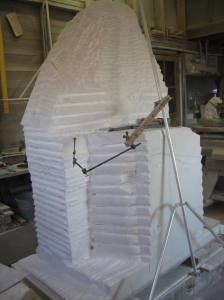 This story continues in Part III.

3 thoughts on “The Story of Hempel Studios, Part II”